When Can You Issue a Subpoena? 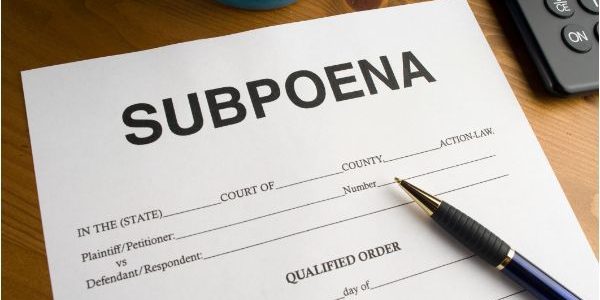 Subpoenas can be powerful documents. They are orders from a court that demand an individual assist with a case or that documents are provided to the court and lawyers handling a case. Lawyers can issue subpoenas as can individuals who are parties to a lawsuit and are representing themselves pro se (meaning, without the assistance of a licensed attorney).

A subpoena is a court mandate that someone appear before the court or that certain records be provided to the court. Ignoring a subpoena means that the person or business is placed in civil, or even criminal, contempt of court. This could result in fines or jail time.

Individuals often have information that is critical to the outcome of a lawsuit, from being an eyewitness to an event to being a strong character reference for the party on trial. Subpoenas can require an individual to appear and testify in court or simply require them to appear for a deposition and have their testimony recorded for future use in the lawsuit.

In other situations, there are documents held by third parties that need to be included as evidence in a lawsuit. This could be police records, medical records, financial documents, engineering drawings, the name of who owns a website, and many other types of regular business records. A subpoena for the records requires that these documents be produced within a certain timeframe, often alongside an affidavit from the custodian of the records stating that this is an exhaustive compilation of relevant documents.

While a party to a lawsuit can ask for a subpoena, they generally do so through their attorneys, who have practice filing and serving such documents. In Utah, a subpoena must be signed by either an attorney or the clerk of court and must be served correctly on the opposing party and the individuals or businesses named in the subpoena.

In some cases, an individual party to a lawsuit can fill out the subpoena form, have it notarized, and have it signed by the clerk of court. In the case of a party issuing an improper subpoena, the party receiving the subpoena can file a motion to quash and, in rare cases when subpoena power is being abused, the court can take away an individual’s power to issue subpoenas.

It helps to talk to the team from Dunn Law Firm about how best to comply with or issue a subpoena if you’re anticipating a trial or in the middle of litigation. To learn more about our law firm and the type of business representation we handle, reach out to the Dunn Law Firm by calling (435) 628-5405 and set up a free consultation today.